Say Goodbye to Turkey Neck with The CoolSculpting Mini Treatment!

Say Goodbye to Turkey Neck with The CoolSculpting Mini Treatment!

Say Goodbye to Turkey Neck with The CoolSculpting Mini Treatment!
Is your double-chin, aka “turkey waddle,” the only thing you notice when you look in the mirror? You’re not alone. Many women and men deal with unwanted fat under the chin and struggle to find ways to lose it. Fortunately, there’s an  FDA-approved, non-invasive treatment to get rid of that double chin—the CoolSculpting Mini Treatment.

How Does The CoolSculpting Mini Work?

In an hour or less, CoolSculpting mini works by freezing fat cells in unwanted areas  with the use a small chin specific applicator (vs the larger tummy and thigh version). A cooling system is used to specifically target the fat cells, after which, the remaining cells work to naturally reduce the frozen cells from the body. Once the fat cells are reduced, they’re gone for good.

The CoolSculpting treatment requires no needles, anesthesia,  or downtown for recovery. Other than a cool feeling one might experience for the first five to ten minutes of treatment (until the area is numb), patients express the treatment is comfortable.  Many patients even return to regular activities the same day.

When Will I See Results from My CoolSculpting Mini Treatment?

Each individual is different and should receive a tailored fat loss treatment plan to meet his or her goals. Depending on your specific circumstances, a double-chin can be treated in as little as two treatments. Many see results within a couple of weeks, with maximum results showing in about eight weeks.  The result after treatment is a more contoured chin for a younger-feeling you!

CoolSculpting not only treats fat under your chin—it’s also been approved to treat fat around your side (love handles), your belly, inner thighs, and outer thighs. In fact, with more than two-million treatments already conducted around the world, CoolSculpting is the only FDA approved treatment for fat reduction.

Contact Us Today to Schedule Your CoolSculpting Mini Treatment!

Does let your double-chin get you down every time you look in the mirror!  Are you seeing signs of mom and dad staring back at you in the mirror? Diet and exercise can’t do much for double chins but Coolscuplpting Mini can.  Contact us today for a consultation to determine if you’re a candidate for our CoolSculpting Mini treatment. 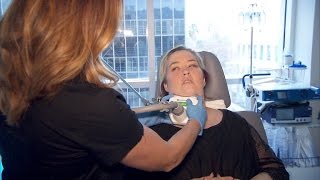 Eliminate your double chin with CoolSculpting CoolMini with Dr. Gerrish

About the Author: Beauty Editor

Dr. Gerrish suggested a different approach utilizing his advanced Coolsculpting techniques. The results were exceptional! I had the procedure performed on my abdomen and love handles, and my waist line went from a 38 to a 32. No kidding! I had to purchase two new belts and I’m back into my old pants. from Art W.